The English breakfast is a recurring theme in British popular culture, but never before has a movie been named after our national dish and we are pleased to bring you details of the very first English breakfast movie, together with an exclusive interview with Sir Dave Courtney himself. The movie is called 'Full English Breakfast', is written and directed by Manish Patel, with Dave Courtney in the lead role, playing the part of Dave Bishop, one of the most murderous gangsters ever depicted on film.

Dave Courtney is a high profile British celebrity gangster (ex-gangster, now retired from a life of crime), the author of six books, the inspiration for Vinnie Jones character in the movie 'Lock Stock and Two Smoking Barrels' and famously was the Head of Security at the funeral of Ronnie Kray.

We got a chance to interview Dave Courtney, writer/director Manish Patel and producer Ralph Stewart, we asked them questions about the movie, the theme and their love of the full English breakfast .

We also got some exclusive shots of the movie that have never been seen before!


Can you tell us how popular the English breakfast is in the British criminal underworld ?

Dave Courtney : One thing about gangsters is the fact that they love their country and its cuisine.

Did you eat an English breakfast in the movie and have you been practicing for the scene ?

Dave Courtney : There is a key scene in the film where I am munching on an English breakfast. We had to do that scene about four times because I kept demolishing the grub on my plate! 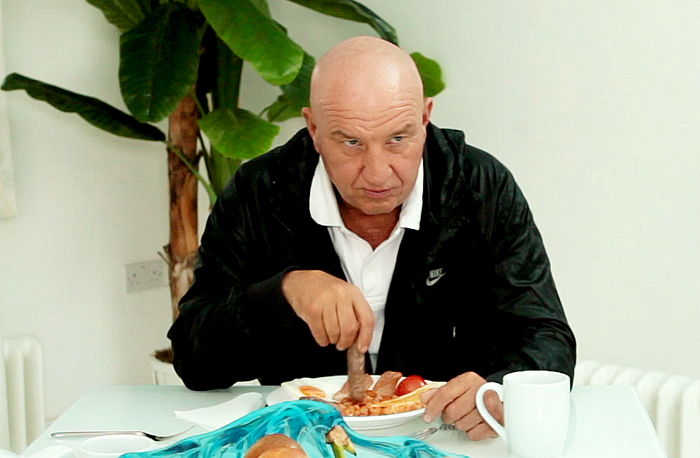 What are the essential ingredients in Dave Courtney's English breakfast ?

Dave Courtney : I like to have my English breakfast served with fried bread. So that's three sausages, couple of friend eggs, 4 rashers of bacon, mushrooms, grilled tomato, good quality beans and chips (not hash brown!). Washed down with a mug of steaming tea sets you up nicely for the day!

Ralph Stewart : I have a background in producing television commercials. Producing a crime film is completely different. You cannot really plan too far ahead because a location might not be usable because of the weather etc. While it was enjoyable making the film it was stressful too.

As well as producing the film I am also the director of photography and editor so I had three key roles to undertake. You have to be able to deal with things going wrong and be able to work a quick fix, while all round you, gangsters are kicking off and you as a producer have to keep calm and carry on!

Did you use any special cinematographic techniques to make Dave Courtney more dangerous ?

Ralph Stewart : We did not need any special cinematographic techniques to make Dave Courtney look even more dangerous. The man was born looking dangerous and he chews up every scene he is in as well as every full English breakfast you put before him !

Were there many beautiful cinematic English breakfast moments in your movie ? 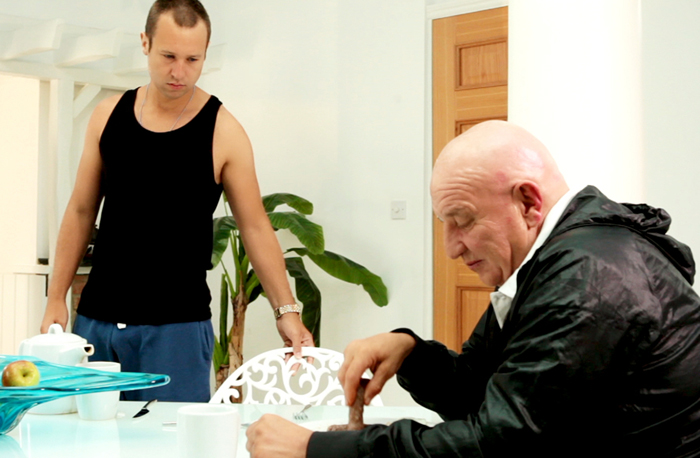 You named your movie after the nations favourite breakfast, how did you come up with that name ?

Manish Patel : While writing the script it struck me that the title of the then proposed film (and now completed!) would need to have a broad based appeal to the British public. The film starts of in a traditional greasy spoon with lots of imagery of the English breakfast and why not?

In fact, this film has a lot of ingredients that will appeal to the masses but the name 'The Full Monty' was already taken so it had to be 'Full English Breakfast' which has worked out very well for us because most people we spoke to have really taken to the title! Added to this mix is the popular appeal of celebrity gangster Dave Courtney who is one of the lead actors in the film. In fact, this is the first time Dave Courtney has appeared in a feature film with a completely professional cast, Dave dominates the proceedings and has acquitted himself opposite well know thespians.

How important a theme is the English breakfast in the movie ?

Manish Patel : The theme of the English breakfast is very important in the movie and the opening sequence is a greasy spoon chef asking the now immortal words "Full English Breakfast?"

In fact, the full English breakfast theme runs right through the film. You are never far away from am English breakfast in the film! It's all about celebrating British and to a large extent English culture. This film is like an advertisement to visit this great nation of ours. FEB takes in the Kent coast, Houses of Parliament, the River Thames, Notting Hill Carnival and of course the English countryside.

Who makes the best English breakfast in your opinion ?

Dave Courtney : To be honest, I don't really have a favourite because when I do my shows across the country I always make a point of having an English breakfast at the nearest cafe to the hotel where I'm staying. What I can say is that depending on where you are in the country there are slight taste variations. For instance, they love their black pudding up north while in the south a lot of cafes serve chips with it.

Manish Patel : I am a massive fan of the Full English Breakfast and the best one I have ever tasted is at the Imperial Cafe in Harrow, Middlesex. Add a mix of brown sauce and ketchup to the proceedings and you are in heaven. I am always on the road filming commercials and documentaries so have had my fair share of English breakfasts around the country but the one at the Imperial Cafe really does it for me.

We as a nation should be doing more to promote the full English breakfast ! For instance after a night out on the tiles in India, why don't the Indians say "I could murder a Full English Breakfast right now!" - it's got to happen and I am sure it will through the efforts of the English Breakfast Society.

While making the film we have produced a music track and video to accompany it called 'Full English Breakfast'. This track will be made available completely free of charge to the nation. We hope England football supporters will adopt the song as a terrace anthem for the forthcoming World Cup. 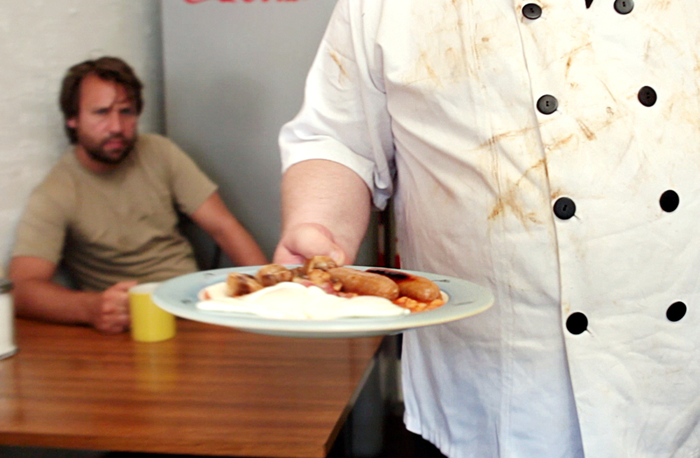 If you want to learn more about the movie, follow the links below !

Check out the trailer here : https://youtu.be/bhmlUiwiq4w